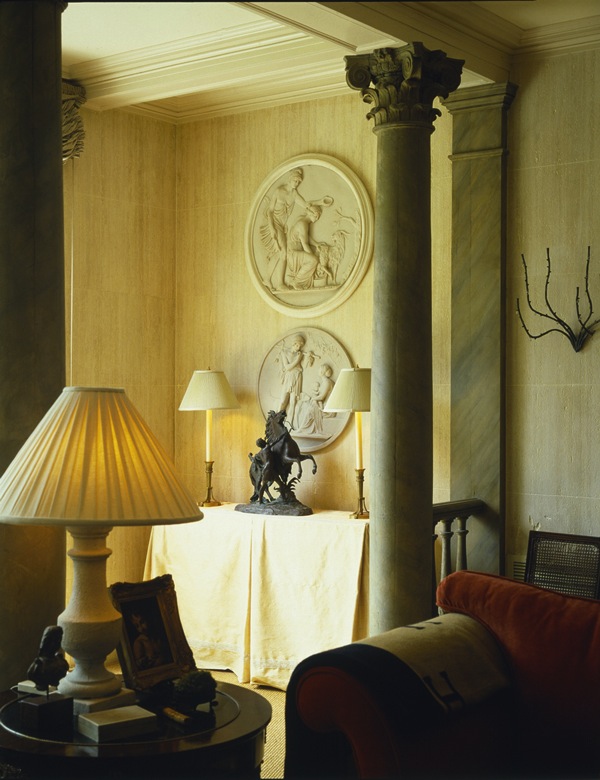 Timothy Corrigan’s tag line “A World of Comfortable Elegance” tidily sums up his distinctive design ethos. Known for his fusion of European elegance with California comfort, he is a master at incorporating elements from all eras. A consistent fixture on the AD100 list, with luxury projects around the world, Corrigan is known for his extensive use and knowledge of antiques, hence the perfect person to consult for a primer on acquiring and living with antiques. While I had originally intended this post as a follow up to the Winter Antiques Show, the mix of old and new is a frequent topic in these parts and a timeless theme.

Although Corrigan’s projects are always laden with antiques, his designs discourage using them in a precious way. His rooms frequently feature unexpected matches like the Sam Francis painting over an 18th century Irish table, above. And while the table most likely has a pedigree, Corrigan promotes buying antiques at all price points for use as is or to suit your needs. Think of how often we’ve seen a dresser repurposed as a bathroom vanity or antique ceramics used as lamps. He stresses that antiques can be affordable as well as a good investment especially when sourced at auctions and flea markets. Corrigan’s entry at Luxe Magazine‘s show house at the historic Greystone estate, above, illustrates again how antiques can work so well with contemporary art, in this case photographs. It’s such a thoughtful design, with the black and white photos relating to the floor tiles and the giant roundel taking your eye up to the spectacular ceiling, unifying the entire gigantic space. Corrigan explained, “The secret is to find good objects (from whatever period) and be willing to place them together either as a way of showing the similarity between periods and styles or to deliberately contrast them so that you see them each in a new way.” In fact, Corrigan frequently uses roundels. “I love using large roundels in rooms (whether they be marble, carved wood, zinc, plaster or even resin) because they provide a wonderful three dimensionality to the wall in a way that paintings cannot. The relief sculpture on roundels provide a subtle almost grisaille-like effect to a room that does not fight with anything else that is going on in the room.” And I love how in the room above they function as almost an architectural entity. Yet below, they become more decorative in this noteworthy office, mixed with other significant objets. “The cabinet was a gift from the King of Holland for Catherine the Great’s private apartments. The porcelain roundels depict all of the great Greek and Roman Gods and Goddesses…and note that Catherine is placed at the very top, above all of the rest. On top of the cabinet are terra-cotta busts depicting the Four Seasons.” Quite the collection! Like the busts in the formal library or garden above, sculpture is a sometimes overlooked antique source that Corrigan frequently incorporates into his designs. I particularly like how the white marble of the bust below bridges the gap between the modern white upholstery and the antique boiserie. “I like sculptures of all kinds (not just busts) because of the way that they bring movement and force to any space.  Whether they are placed on a table, resting on a pedestal or just sitting on the floor, they provide a nice reflective and dimensional break to the space.  I don’t have any rules about what they need to look like—it’s fun to mix traditional and more contemporary sculptures into a space.  I really like placing sculptures in garden flower beds because they serve as a wonderful “hard” contrast to all of the foliage and always come as somewhat of a surprise when you come upon them.” Large antique textiles are even less frequently seen these days. I asked Timothy why he thought that was so when they can be used to such great effect as he did above. “Tapestries are much overlooked because people associate them with old baronial halls or castles. They provide beautiful and very subtle color and textures that can bring a space interest and they don’t just need to be hung on the wall. I use them as tablecloths and even use one as a bedspread in my house in LA.”

Stop by tomorrow as we continue our conversation with Timothy Corrigan about designing and living with antiques. 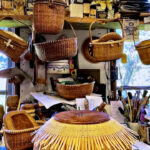 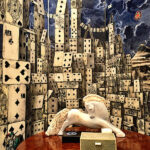 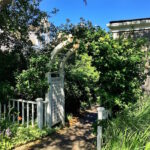 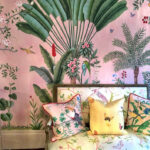 Paris Deco Off 2017 Color and Pattern

27 thoughts on “Timothy Corrigan | Designing and Living with Antiques”