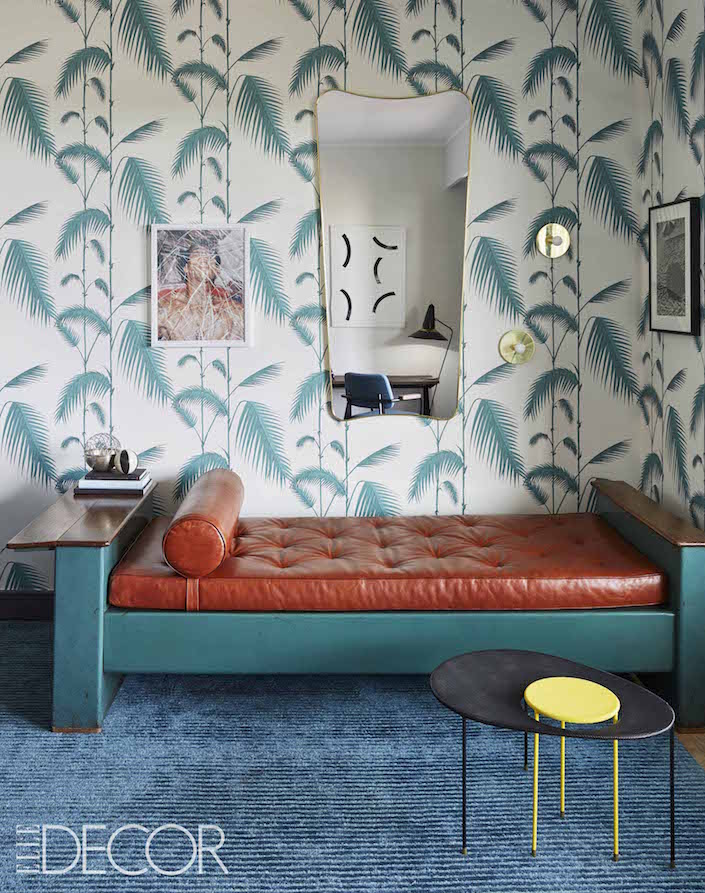 Each year, ELLE DECOR assembles stories from the best of their international editions for their Global Style issue. A perennial favorite, it includes designers and projects around the world, introducing us to new faces and locales. The cover of this special issue, which will hit newsstands next week, features a project by the talented Monaco-based design firm Humbert & Poyet, which originally appeared in ELLE DECORATION Netherlands. 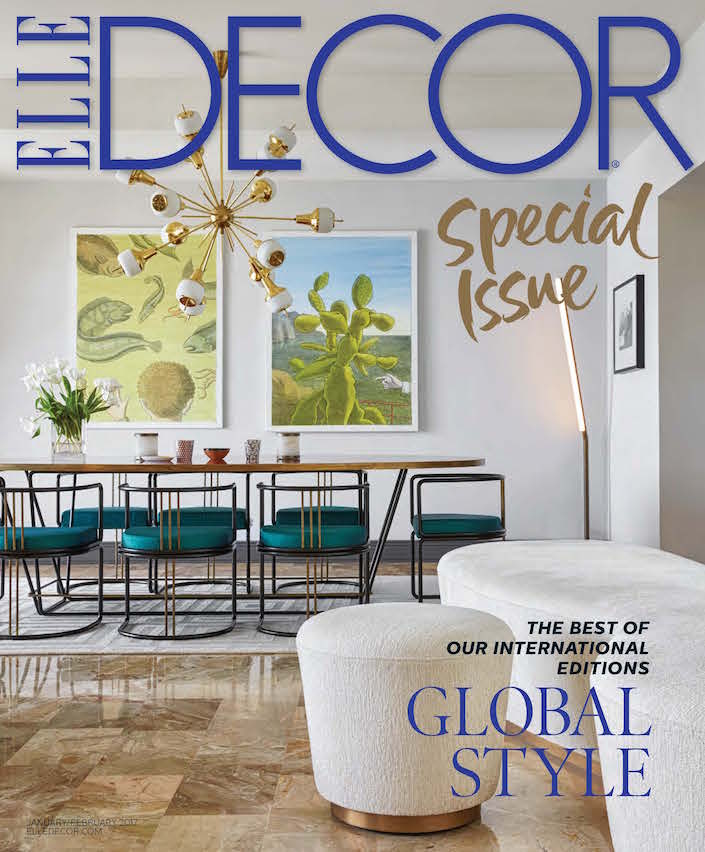 With a focus on luxury and fine craftsmanship, their modern spin on traditional elegance yielded a fresh redo of a tired ’70s apartment on Monaco’s prestigious Avenue Princesse Grace. Always looking to emphasize a sense of place, Emil Humbert and Christophe Poyet took inspiration from a pair of Slim Aarons photos of Palm Springs and the Hotel du Cap-Eden-Roc that now hang in the entry of the apartment, below. The photos capture the timeless glamour that the design duo wanted to emulate for this large four bedroom apartment. “We are nostalgic for the golden era of the French Riviera.” 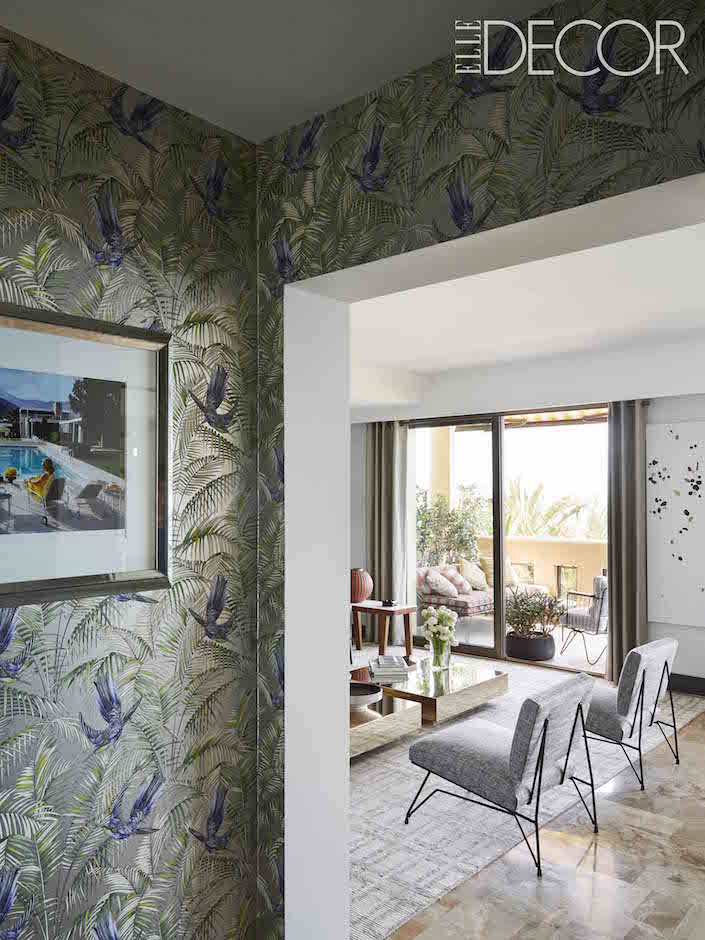 Matthew Williamson’s tropical Sunbird wallpaper for Osborne & Little sets the tone in the entry as you see through the living room to the terrace and vegetation beyond. “We wanted to add something playful, but only in little touches,” Humbert says. “Whereas in the ’70s people might have covered a whole room in a palm pattern, we chose to use it just on certain walls,” as with the Cole & Son Palm Leaves in the home office below. Significant pieces from 20th century masters are included throughout the apartment such as a 1936 Jean Prouvé daybed, below, paired with a Gio Ponti mirror, below.

The living room epitomizes a chic mix of global style with a strong reference to Italian design. Midcentury Italian chairs in a vibrant Nobilis velvet, Saporiti Italia chairs dressed in Pierre Frey, custom brass cocktail tables that are perhaps a nod to the legacy of 70s Italian great Gabrielli Crespi, and Flexform leather sofa and side tables are enhanced by brass and alabaster pendants of the firm’s own design. The large photo by French photography team Yves Marchand & Romain Meffre, part of their series on abandoned theaters, adds an element of drama and gesture to monuments of passing glory. 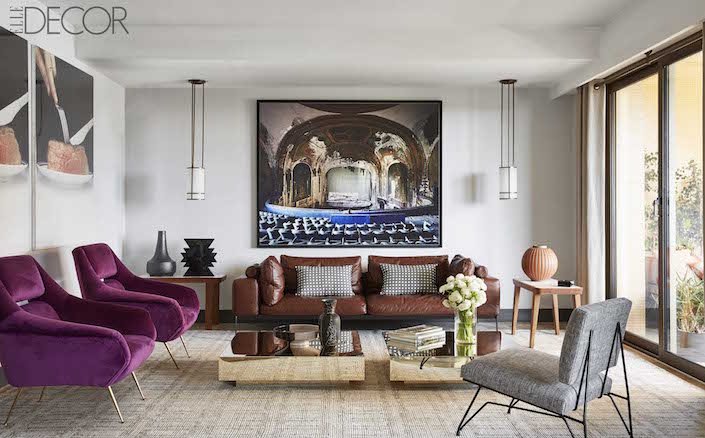 The master bedroom is a more understated version of the more exuberant sophistication in the rest of the apartment. Here simplified formed and offer a restful restraint with a Flexform bed dressed in quiet Hermès linens, a Prouvé daybed, Cees Braakman console and Gubi lamp. Artwork by Michael Wilkinson, Danh Vo and Robert Mapplethorpe is also more discreet. 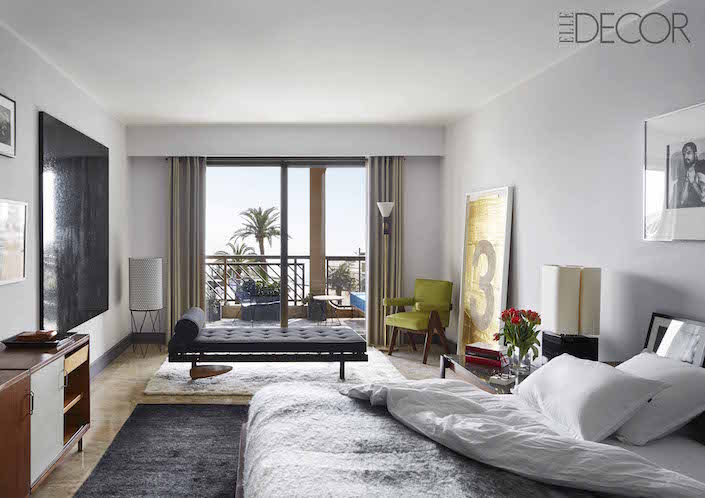 One of the most appealing aspects of the apartment is its access to the outdoors. As Humbert explains, “What I love most about Monaco is the very direct relationship between the city and the water. You can be walking among high-rises for a quarter of an hour, and all of a sudden, you get an unexpected view of the sea. It really is just so beautiful.” 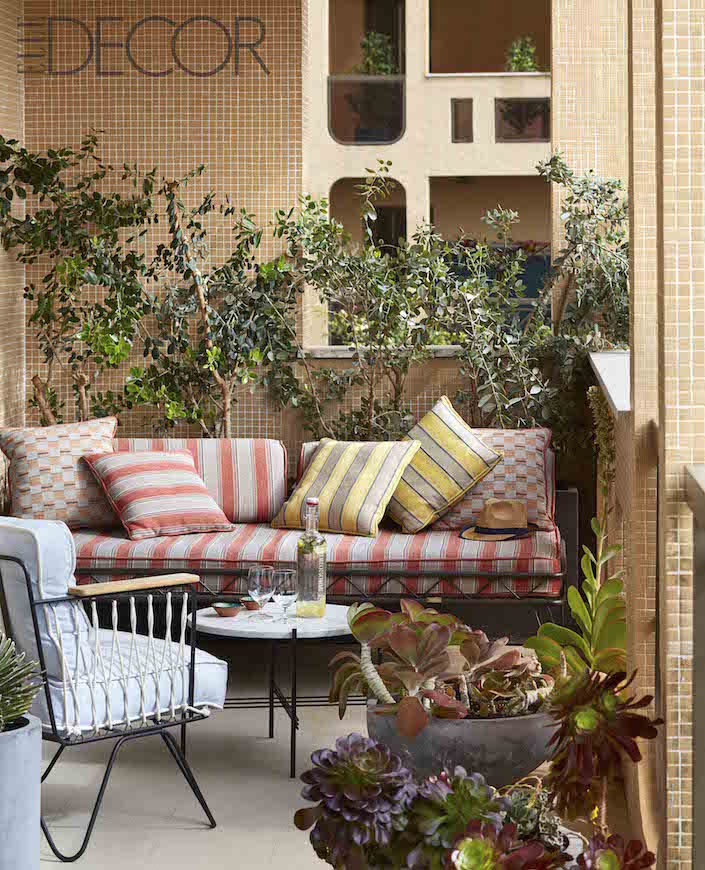 all photos by Francis Amiand

One of the most appealing aspects of the apartment is its access to the outdoors. As Humbert explains, “What I love most about Monaco is the very direct relationship between the city and the water. You can be walking among high-rises for a quarter of an hour, and all of a sudden, you get an unexpected view of the sea. It really is just so beautiful.” All this lucky resident has to do is open a glass door and he is on one of his verdant terraces. Below a 1950 Wim Rietveld sofa with Osborne & Little striped cushions and chair from Honoré offer relaxed outdoor living. I’m looking forward to next week when I can delve into the full issue of global style inspiration and in the meantime, you can check out the full article on this project at ELLEDECOR.com. 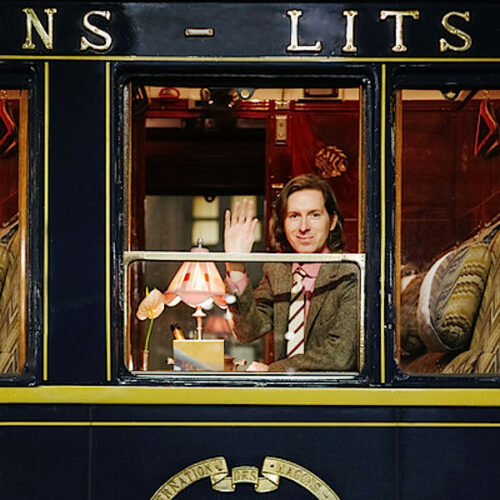 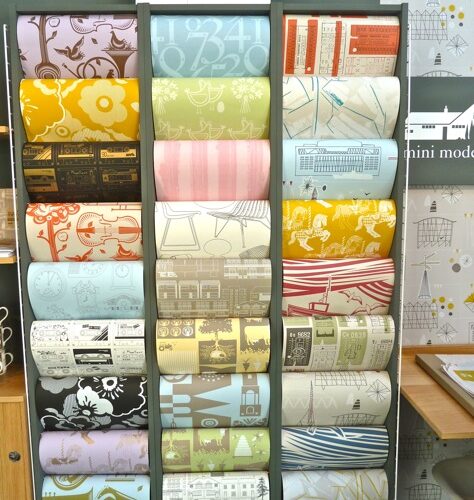 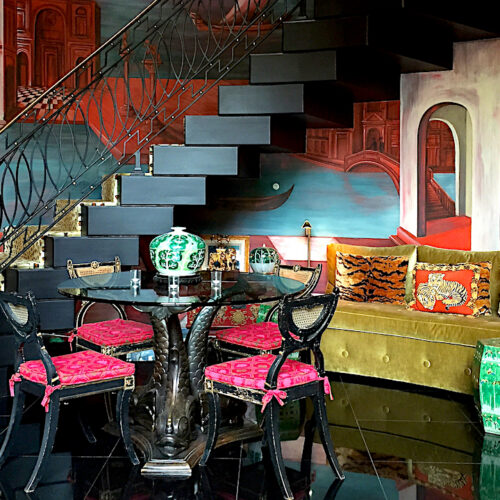 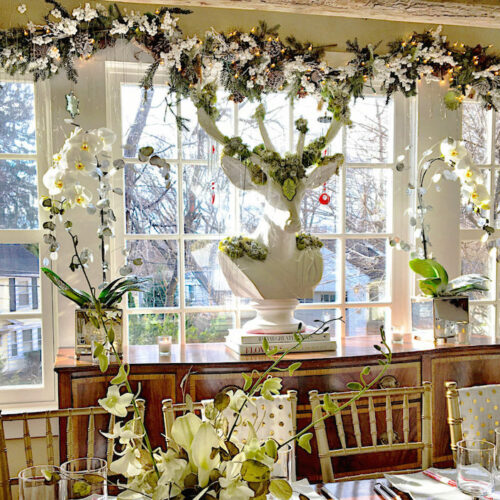