Sometimes we are all so busy just keeping up that we don’t get a chance to take a step back. But that’s of course when we really absorb what we read and see and are able to connect the dots. When I saw a post about product designer Scott Henderson on the Tory Burch blog today, it reminded me of something I’ve been meaning to post for a while. Henderson has designed everything from baby bottle dryers and ergonomic dustpans, such as this one for OXO, 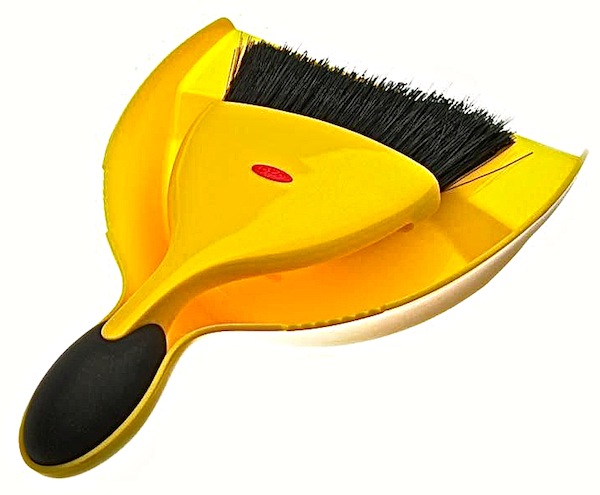 to furniture, like the steam-bent plywood Slat chair, below, for Mint, the design collective of which Henderson is a co-founder, 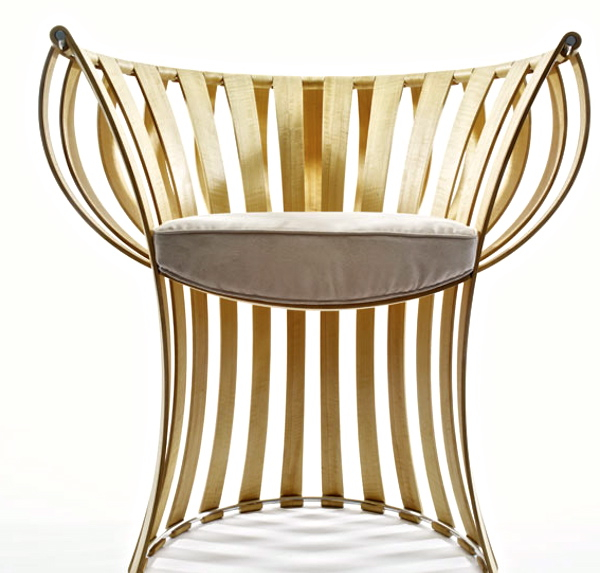 which led to the world of superyacht design. His Quillon motoryacht, below, is inspired by a scabbard, the protective guard of a saber sword. 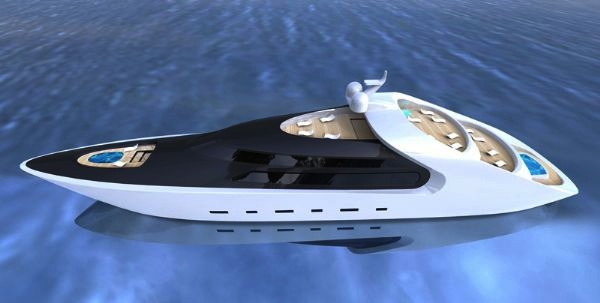 When asked what good design is, Henderson replied “Something that’s very well thought out and works not only on a functional level but on an emotional level.” So although he designs superyachts, his primary work as a product designer is “transforming the mundane” into well designed utilitarian objects. He advised making thoughtful choices when updating your house, not only with the large furniture but also the smaller utilitarian objects, so that everywhere you look, there is a story to tell. 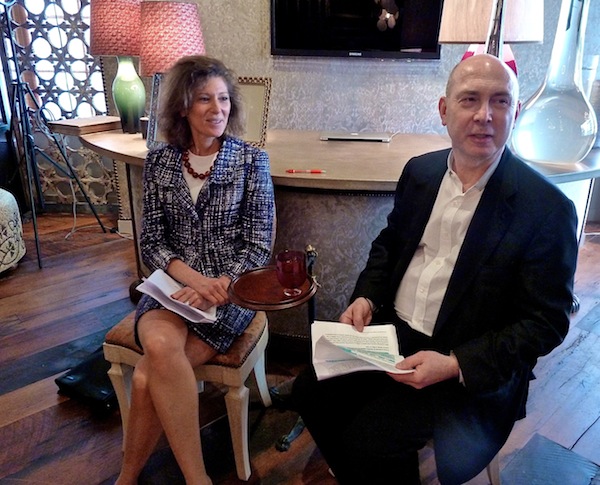 And it is this junction of where art meets design and of the emotional connection to what we live with that reminded me of a fascinating talk I attended at D&D spring market last May. Consultant Susan de Menil and retail impresario Murray Moss met at the Fortuny showroom to chat as part of the Design Loves Art series.

The seminal question was how do we decide what is art and why does there seem to be such a schism between functional and non-functional art. Why are most museums, for example, so departmentalized when that is not how we live? (Exceptions including The Metropolitan Museum’s Wrightsman Galleries for French Decorative Arts and the new American wing, both offering marvelously vivid evocations of history) Why is furniture in one place, decorative art in another and sculpture somewhere else? And why is the chair not necessarily considered as art in the same category as the painting? A lot to consider! 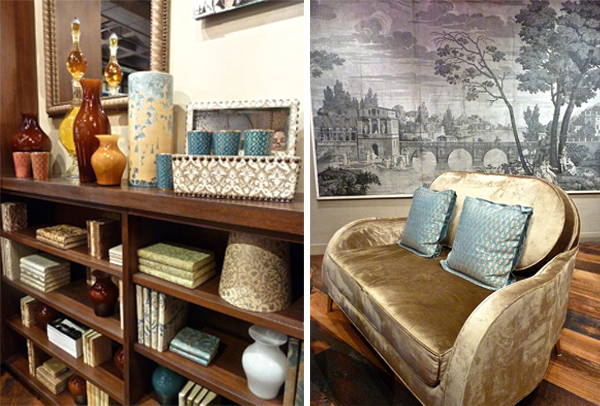 Moss suggested that perhaps decor is the glue that holds it all together, for the way we experience what we define as art and design is in most cases residential. We live with these subjects fused and the interior designer is frequently the master of the mix. And what better place to discuss such subjects than at Fortuny, whose founder was at the intersection of art and design before that concept was even acknowledged. A true renaissance man, he championed both functional and non functional art forms before multitasking and interdisciplinary were words. 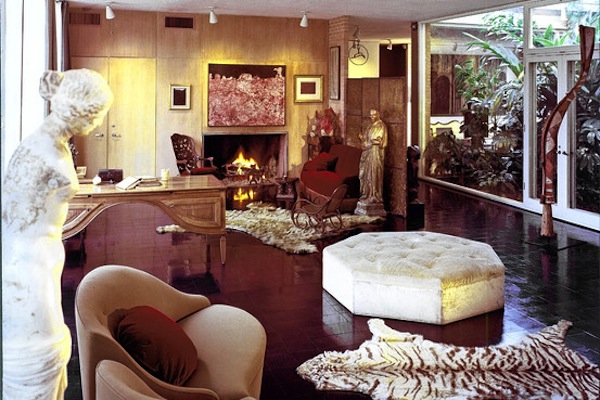 So the broad question is what exactly is art and how do you live with it. And who is responsible for nurturing the juxtaposition between art and design if our institutions are not providing us with models? Moss and de Menil discussed the interesting example of  her inlaws famous Houston house, above. Designed by Phillip Johnson, the hiring of couturier Charles James to decorate caused such a rift that Johnson was never to include the structure in any of his monographs. Having spec’d rooms with severe ascetic furnishings, he felt James’ inclusive designs destroyed his temple to Modern Internationalism. But the de Menils, with five children, wanted to live with what they had and loved. 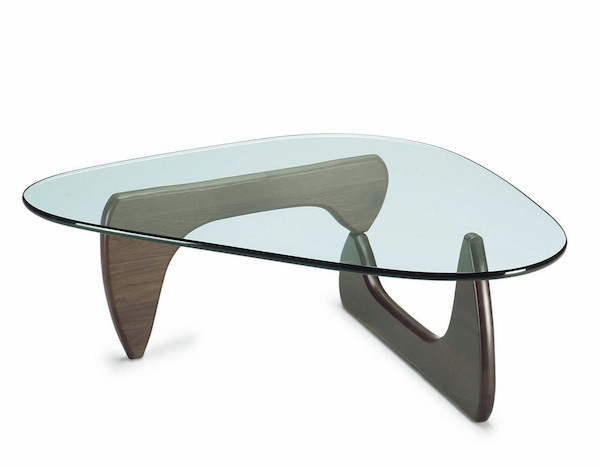 So if furnishings are functional does that relegate them to the merely functional? Is a Noguchi coffee table merely a functional object or is it art that happens to have a function? Moss questioned why art is devalued just because you can put a drink on it. At the end of the day, art and furnishings are seen together. Wouldn’t your Rothko benefit from being in the same room as a beautiful functional object, one that has to be there anyway? 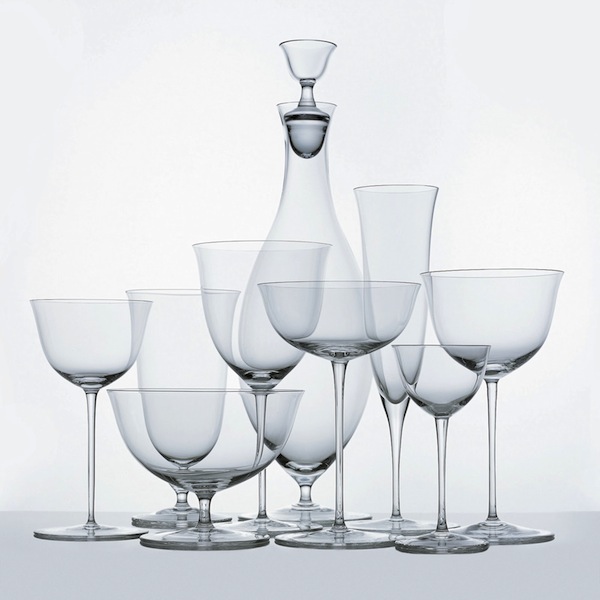 The world of objects provides another emotional connection for the user. Moss and de Menil agreed, for example, that drinking from a beautiful fragile glass, (such as the exquisite Josef Hoffman Patrician Glass Service above, designed in 1917 and produced by J L Lobmeyr) is experiential. It is a behavior modifier that has a positive effect on everyday life. And isn’t that what art is about? So where do you draw the line between art and design and is it decor that is responsible for their working successfully together as emotional connections telling a story for an enriched everyday experience? 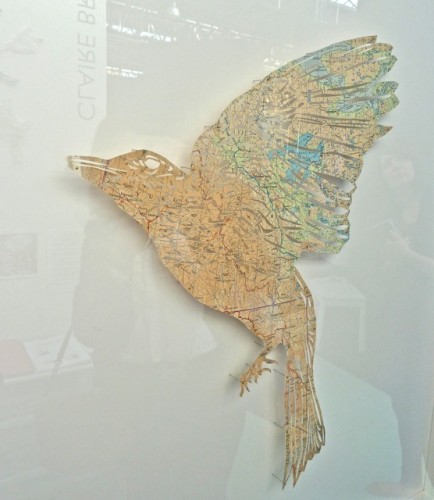 Originality at Origin: Made not Manufactured 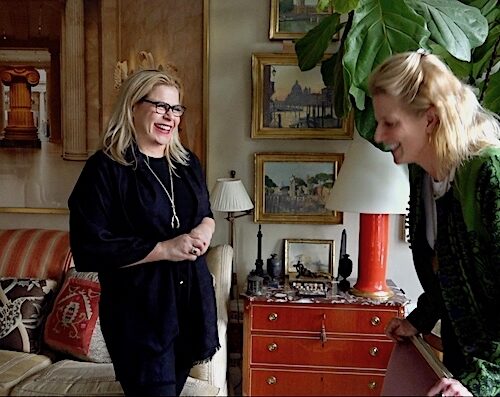 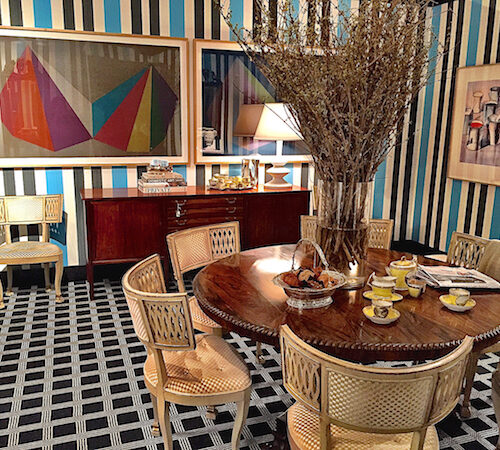 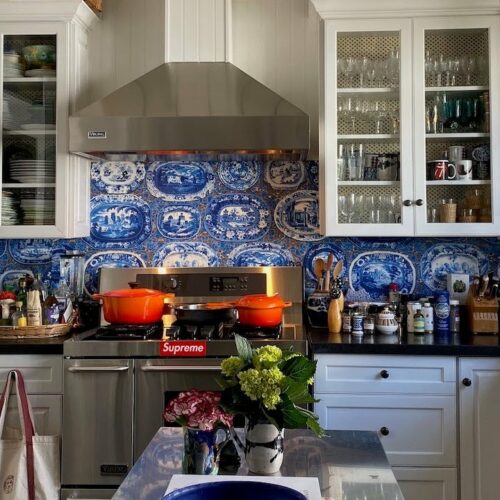 7 thoughts on “The Intersection of Art and Design”